Specification for an accessible video/media player

Reading Time: 3 minutesThe whole world is going video now. Figures vary, but something like 70 hours of video content are uploaded to YouTube every minute, and businesses are coming to rely on the power of video marketing to reach their customers and potential customers. 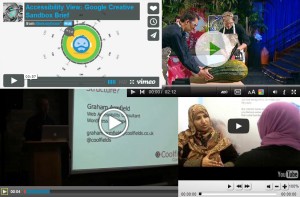 On the face of it, it’s easy to embed YouTube and Vimeo videos into your website – it’s usually just a small piece of code to put into your pages. But the challenge comes when you want to do so in a way that’s fully accessible – that is, in a way that allows all people to get the full value from a video regardless of any disabilities or impairments. Up to now, the embedded players from the video hosting sites haven’t been fully accessible.

So, prompted by my own desire to include videos on the Coolfields Consulting website, and to do so in an accessible way, I’m investigating the various options for doing this. And I’ll be sharing the results of my quest in a series of blog posts and yes, videos too. The results are likely to influence which player I should use, and possibly which platform to host my videos on.

First, I thought it would be useful to set out my requirements for an accessible video player.

And given that I work use WordPress on my own website, and extensively on websites I develop, I have another personal requirement:

What do you think?

Have you got any comments on this list? Or do you think I’ve missed any requirements out? What would be on your list?

Use the comments form below to let me know what you think.

Players that I’m going to test

These are the video players that I’m aware of at the moment and that I will be testing out:

Keep your eye on the prize

During my investigation I’m hoping to find at least one player that fits the bill. After all, an accessible video player will help a lot of people who can’t enjoy or learn from online videos at the moment, and it’ll certainly get a lot of support from the ‘accessibility community’ around the world.

So, if you’re aware of an embeddable (is that even a word?) video player that ticks all the boxes, I’d be very grateful if you could let us all know.

Or maybe you’d like to have a go at building one?

13 Responses to “Specification for an accessible video/media player”