Reading Time: 4 minutesCheckboxes and radio buttons are similar in that they both allow users to choose from a list of items. The difference between them is that radio buttons only allow a single selection to be made in any one group. But they both can have implications for web form accessibility if they’re not used correctly.

This post outlines the best practices for using checkboxes and radio buttons and highlights some of the potential pitfalls with their use.

Choosing from a selection

Depending on the information being collected by the form there may be an associated question which provides the context.

Another typical use of a checkbox is to allow users to confirm something.

Note that there would not normally be an associated question with this type of use. 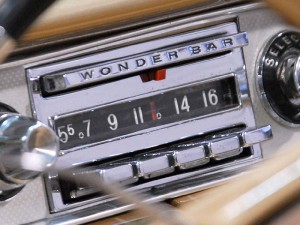 Radio buttons take their name from station selector switches on some radios – partticularly old-fashioned ones or car radios. These station presets were either fixed at manufacture or could be pre-programmed by the user (more common today) and selecting one deselects any previous selection.

Radio buttons in web forms behave the same way – assuming they are grouped correctly, see below.

Unlike a checkbox group, a radio button group would almost always have an associated ‘question’.

It is not appropriate to have a single radio button in a group as once selected it cannot easily be unselected.

Form labels – are they clear enough?

As discussed in Accessible Forms – Should Every Input Have a Label? all input fields need to have a label and the label is linked to the form field using the id attribute. Note that the name attribute is also important for radio buttons and checkboxes to maintain the groupings.

So using the checkbox pizza topping example from above:

Note that the question is not a label. As we’ll see in a later post, plain text such as this within a form can easily be missed by screen reader users. Sometimes this doesn’t matter if the ‘answers’ convey the full meaning. But consider this series of radio button questions you might find on a home insurance site.

The labels for the radio buttons are actually the yes/no answers to the questions. Screen reader users who will typically be tabbing from one field to the next will hear something like the following:

One solution would be to include the question and the answer in each of the labels:

Whilst this may be a good solution for screen reader users it may not be as popular with all sighted users.

Using the techniques described in Text for Screen Readers Only it would be possible to hide the extra text from sighted users but still have it read to screen reader users.

This is a robust solution to the problem and is still the best approach where you need to cater for users with older browsers and/or screen readers.

A more elegant solution for more modern browsers and screen readers is the <fieldset> element with its associated <legend> element.

The whole question would now become:

The <fieldset> and other form field grouping elements for input fields are considered in more details in a future post – Grouping Elements Together With Fieldset.

Got any other suggestions?

If you’ve got any comments on any of these posts I’d be happy to hear them. Likewise if you feel I’ve missed anything out why not let me know. You can leave a comment using the comment form below.

Previous post: Accessible Forms – Should Every Input Have a Label?